January 14, 2021
Part of the reason for creating the VnBJan2021 Diorama was to figure out to to connect my bridge to the layout. I found the HO Scale Bridge Shoe (Pedestal) by bkpsu on Thingiverse and printed it out but it looked too big, so I decided to use OpenSCAD and started over. One of the reasons that I love OpenSCAD is that if you create it right you can incrementally adjust things until you get them just right without having to manually move lots of little points. Since all values are calculated it is also easy to revert back to a previous version and try a different combination of settings.


I started with the basic upright shape which is a hull of a cylinder and a cube. I adjusted the position so that everything was centered so that it would be easier to position later.

Next I put that in a module with the option to add a nut and remove the center.

After that I created three uprights for the base and added base a plate underneath. I chose 0.8mm because it would give me three layers at a layer height of 0.2mm. One of the uprights I rotated 180 degrees to keep the nut on the outside.

Next I added 2 of the upright shapes for the top and a top plate.
Next it was time to test the print and adjust the parameters as necessary. Since I wanted a piece of filament to be the bolt I set the bolt size to 2.2mm for 1.75mm filament, OpenSCAD doesn't take subtract as much as you think with cylinders using the difference feature, especially at lower $fn values. 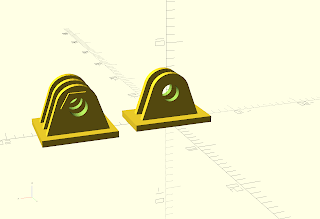 Next I needed a way to connect these to the bridge that would give me the flexibility of changing things around or easily removing the bridge. I measured out the place where the bridge could be connected to another bridge. Creating a cube just slightly wider than the top of the shoe bridge shoe top and 2 layers thick at 0.2mm layer height. I added a section that stuck up into the Altas connecter area and removed 2 holes for the screws and 1 for the center piece. 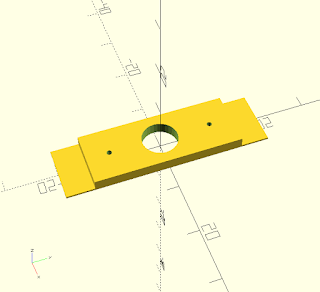 Next I printed 6 pairs of shoes and 3 adaptors. I glued a pair of base bridge shoes to 1 adaptor to use as a template to get the other two in the same orientation on the bridge.
3d Print Diorama Scenery Detail

Popular posts from this blog

February 11, 2021
So I've decided to take a short detour down the Walther's National Model Railroader's Build Off. Initially I'll post information about the contents of the Individual Class Coal Country kit . I just received most of the kit on 2/9/2021. The track appears to have been shipped in a different package, which seems reasonable since its dimensions are considerably different than the rest of the pieces. The kit cost $100 + shipping. If purchased the pieces individually it would have cost $184.83 the full prices or $173.83 with the sale prices. If you are a part of the Year Master's Club you get the 10% of which brings the price down to $90 + free shipping, seemed like a good deal to me even if I don't win the contest. Package Contents: Walther's Cornerstone - Coal Flood Loader Part # 933-3051 Price: $39.98 (on sale 2/9/2021 for $33.98) https://www.walthers.com/coal-flood-loader-kit-4-x-6-x-11-quot-10-2-x-15-2-x-27-9cm Walther's Cornerstone - Industry Office Part
Read more